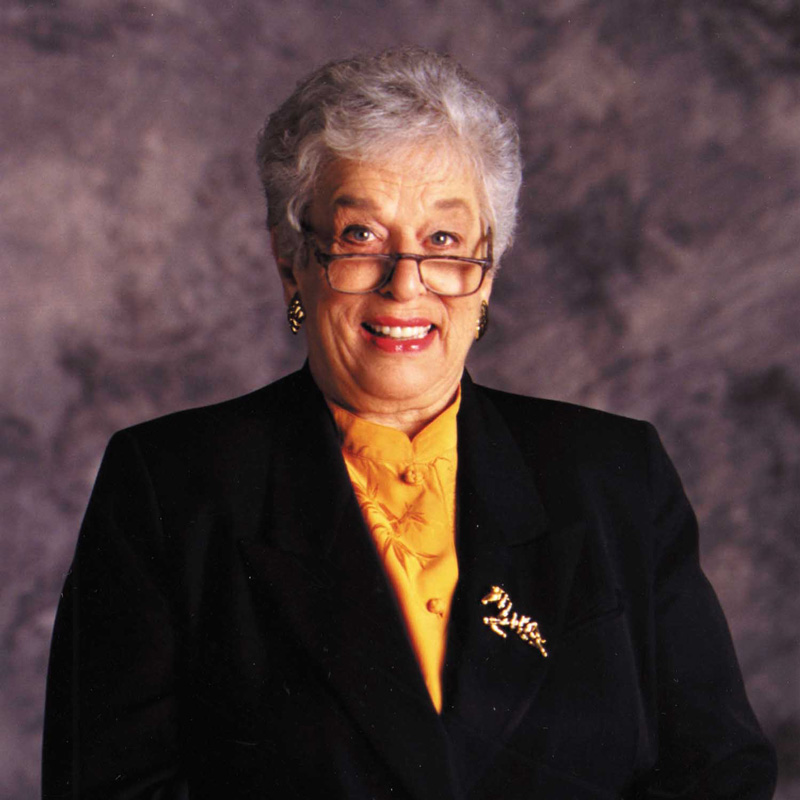 GERTRUDE BOYLE (deceased on November 3, 2019 at age 95) was the spirited matriarch and chairwoman of the board of the international outdoor apparel and footwear manufacturer Columbia Sportswear Company. She was also the first female inductee into the Sporting Goods Industry Hall of Fame. Hailed by Working Woman magazine as one of “America’s Top 50 Women Business Owners,” Mrs. Boyle was the center of Columbia’s irreverent, award-winning advertising campaign. She portrayed cantankerous “Mother Boyle,” the overbearing taskmaster who enforced Columbia’s demanding quality standards. This campaign earned Columbia the coveted Marketing innovation award at the 1997 Super Show, an international sporting goods and apparel trade show.

Mrs. Boyle was part of Columbia Sportswear since her father founded Columbia Hat Company in 1938. Throughout her teens, she helped with the family business. She then attended the University of Arizona and earned a degree in sociology in 1947. While at college she met her future husband, Neal Boyle, whom she married in 1948. When Mrs. Boyle’s father died in 1964, Neal took over the helm of the growing company. Just six years later, in 1970, at the age of 47, Neal Boyle died unexpectedly of a heart attack. He left three children, an expanding company leaning heavily on bank loans, and a wife whose previous experiences with finances was her monthly ritual of throwing all the bills across the living room and paying the one that flew the farthest.

Mrs. Boyle soon discovered that running the family’s million-dollar sportswear company might be a little different. Two years later, the bankers decided it was time for Mrs. Boyle and her son Tim to sell the business. When she sat down with the prospective buyer and realized she would only make $1,400 off the sale, Mrs. Boyle told him, “For that kind of money, I’ll run the company into the ground myself.” That was 31 years ago. Since Mrs. Boyle and Tim started running the company, Columbia Sportswear Company went from bankruptcy to become one of the largest outerwear manufacturers and the leading seller of skiwear in the United States. Columbia’s sales soared from $12.9 million in 1984 to $615 million in 2000, and the company continues to forge ahead with product diversification and innovation.

Throughout her career, Mrs. Boyle was a leader in the Portland community. The area’s deep respect for her was exemplified in 1997 when the prestigious University of Portland bestowed an honorary doctorate on the then 74-year-old grandmother of five. Mrs. Boyle received many other honors recognizing her business savvy and philanthropic endeavors.