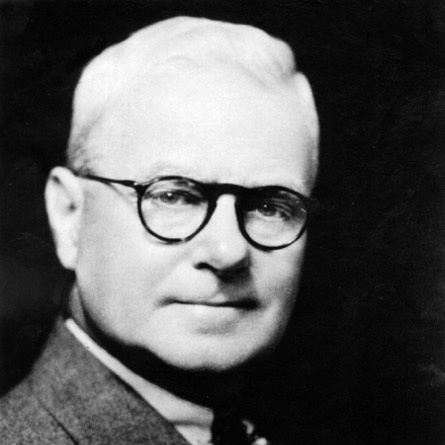 Known throughout the sporting goods industry as “Bud,” J.A. HILLERICH (Deceased November 28, 1946 at age 80) created one of baseball’s most famous trade names – the “Louisville Slugger” bat. He was born and raised in Louisville, Kentucky. Soon after completing grade school, he started as an apprentice in his father’s woodturning shop. Mr. Hillerich was a lover of baseball from his boyhood. He played on local semi-professional teams and was a star hitter himself. When he was 17, in 1884, he turned out the first “Louisville Slugger” bat. At the time, his father could see little future in baseball or baseball bats.

So Bud took it upon himself to develop and sell the bat that was to find high favor with professional baseball teams because of its design and high quality. Almost single-handedly, he guided the bat end of the business for 20 years until 1911. During that time, the effectiveness of his efforts and his enthusiasm convinced his father that a great future for the company lay in the manufacture of baseball bats.  He became his father’s partner in 1899 and president of the company when his father retired in 1911.

Two years later, the name of the firm was changed to Hillerich & Bradsby when Frank Bradsby became secretary. To Bud Hillerich alone goes the credit for creating one of the most familiar products known to the American sporting goods industry – the “Louisville Slugger.” But he made another outstanding contribution – 60 years of fine example. The integrity of his product and his policy served as a model to follow and a standard to meet.