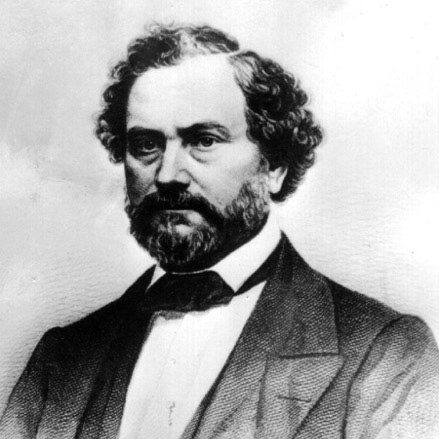 An enterprising spirit manifested itself early in the life of SAMUEL COLT (Deceased January 10, 1862 at age 47) and led to important developments in the firearms field. He was born in 1814 in Hartford, Connecticut and attended school in Massachusetts. At 16, he left home and the neighboring farms where he worked and went to sea. He was ship’s boy on the vessel Corlo, sailing from Boston for Calcutta. The byproducts of the voyage proved to be a major factor in his later career because it was on board the Corlo that Samuel Colt got the idea for a revolving cylinder handgun. He watched the ship’s wheel and noticed that the spokes always returned in perfect alignment with a locking clutch that held the wheel in position. He whittled out a wooden working model and later developed a practical handgun from the principles of the model.

Col. Colt entered the manufacturing field in 1836, founding Colt’s Patent Firearms Company at a time when American-made guns were just coming into their own. Mass production methods reduced the cost of Colt firearms, making them available to the general public. This had its effect on 19th century history, particularly in the settling of the western United States. Although much of Col. Colt’s work was done in the development of military weapons, which also left its mark on U.S. history, he is considered an outstanding contributor to the sport of handgun shooting and to the development of handguns as sporting equipment. He died in 1862, leaving a tradition of progress which his company has continued in the firearms field.